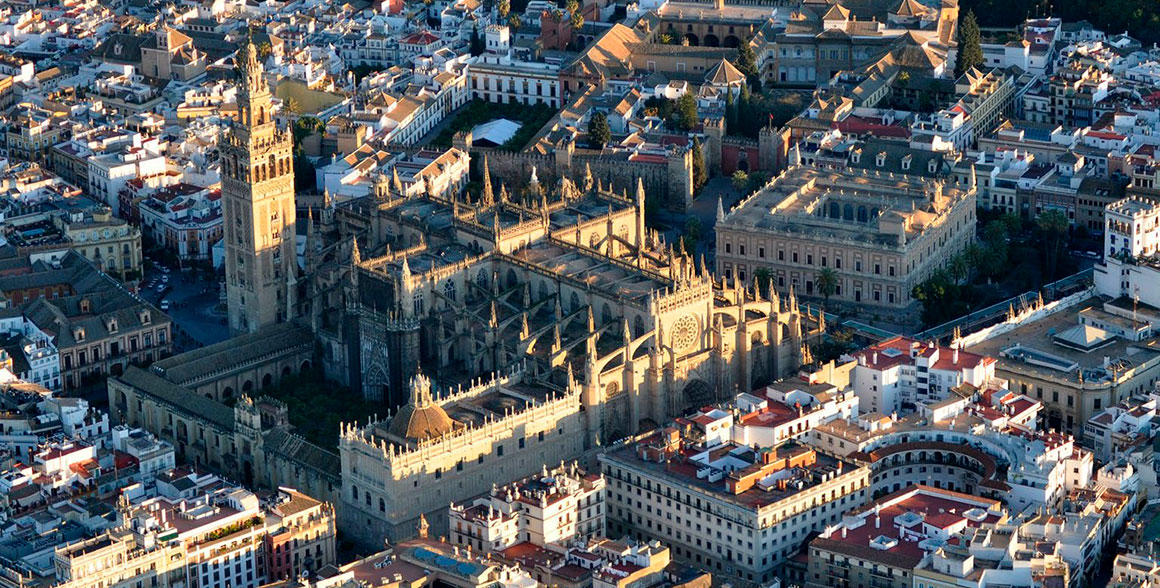 Seville, capital of Andalusia, Roman, Arabic, Renaissance, Baroque, Latin American, Marian, flamenco, bull-fighting, modern, festive, bright, perfumed, sea-faring, traditional, hospitable, gracious, cosmopolitan, religious... All of these adjectives, and many more can be applied to this city, which not only typifies all that is "Spanish" and "Andalusian", but also contains such innumerous artistic, cultural, leisure, social and tourist attractions, that is has also become one of the most universal, best-known and most-visited cities in the world, birthplace and inspiration of writers, painters and artists in general.

A blend of art traditions

Many civilizations have come and gone in the city of Seville. The Tartessians founded Hispalis, and the Romans built the famous Itálica next to it in 207 BC.

Founded by General Escipion, two Roman emperors were born there: Trajan and Adrian. The long presence of the Moors, from 711 to 1248 AD, left permanent imprints on the city.

The years of highest splendour in Seville happened after the discovery of America. During the 16th and 17th century its port was one of the most important in Spain, because it had the monopoly of the foreign trade by sea. Thanks to the trade carried out during that period in Seville, many mansions, stately homes, churches and convents were built.

The main monuments in town - the Cathedral, the Giralda, the Reales Alcázares Palace and the General Archive of the Indies - have the UNESCO World Heritage designation. The Gothic cathedral stands in the white-washed Santa Cruz district, built on the Almohad Great Mosque of Seville. Some of the Moorish elements still remain - the old minaret, which is the famous Giralda, and the Orange Tree Courtyard.

Impossible to find another urban centre which boasts such varied and unusual monuments and places of such beauty as the Giralda, the Cathedral, Reales Alcázares (Arabic Palace), the Torre del Oro, the Maestranza (bull-ring), the Casa de Pilatos, the Plaza de España, the María Luisa Park, the Maestranza theatre, the Barrio de Santa Cruz (Santa Cruz district in the city centre), the Fábrica de Tabacos (Tobacco Factory), Town Hall, the Dueñas Palace,  the City Walls, the Fine Art Museum, the Contemporary Art museum, the Alameda de Hércules, the Barrio de Triana (Triana district), the bridges over the Guadalquivir, the Cartuja and monastery and the site of Expo 92, the buildings from the Universal exhibition in 1929, the Casa de Luca de Tena, the patios of its traditional houses, the balconies and railings, as well as an endless number of churches, convents and other details which convert the ancient city center into an open-air museum. 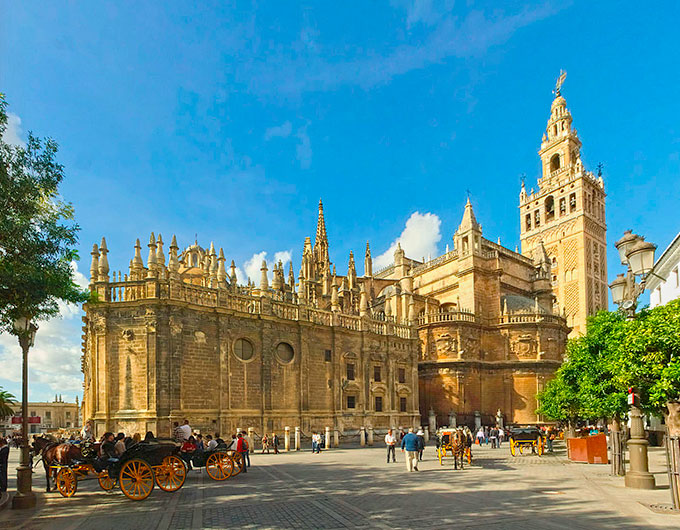 The Cathedral of Seville

It is the largest Gothic temple in the world. Also known as the Cathedral of St. Mary of the See, it is the largest Gothic cathedral in the world and the third Christian temple after St. Peter’s in Rome and St. Paul’s in London. Since the conquest of the city, November 23, 1248, the building of the aljama, or the Almohad Mosque, was converted into the cathedral of the archdiocese of the Kingdom of Seville. 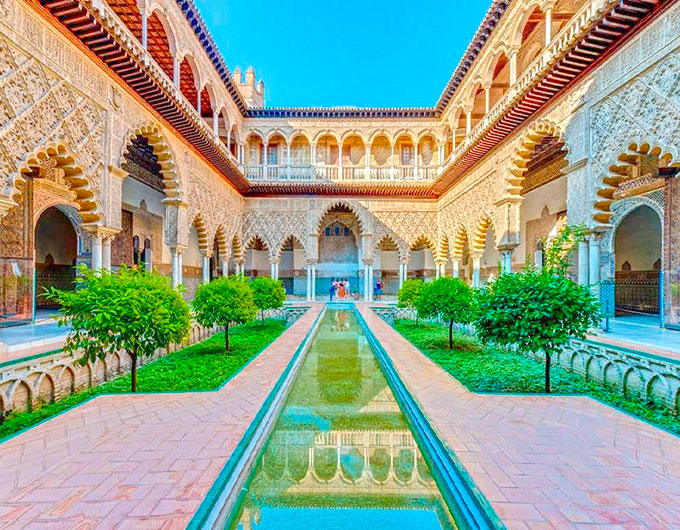 The Alcazar of Seville has always been used as lodging for kings and important personalities. It is made up of different buildings from different eras. The original fortification was built on an old Roman, later used by Visigoths. Strolling through the Alcazar Gardens can be one of the most unforgettable experiences of your visit. 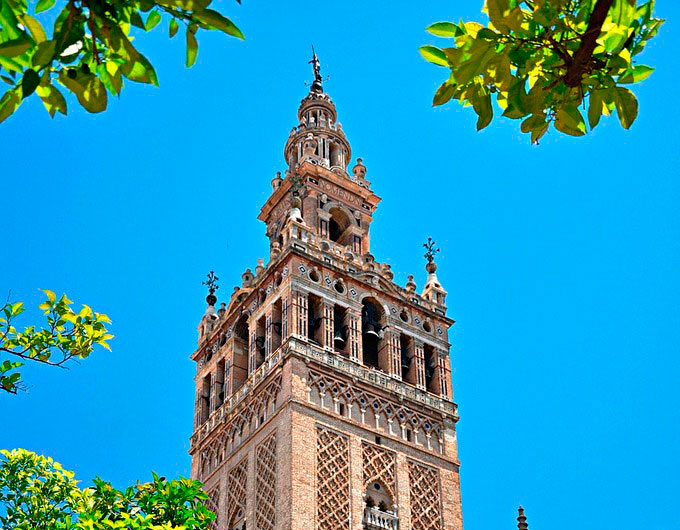 The Giralda of Seville

It is the most emblematic monument in the city. The Giralda is the bell tower of the Cathedral. In its day, it was the tallest tower in the world. Standing at 97,5 m in height, in addition to being one of the most famous images of the city and Andalusia. The tower consists of two different perfectly unified pieces, a perfect example of the crucible of cultures in the city. 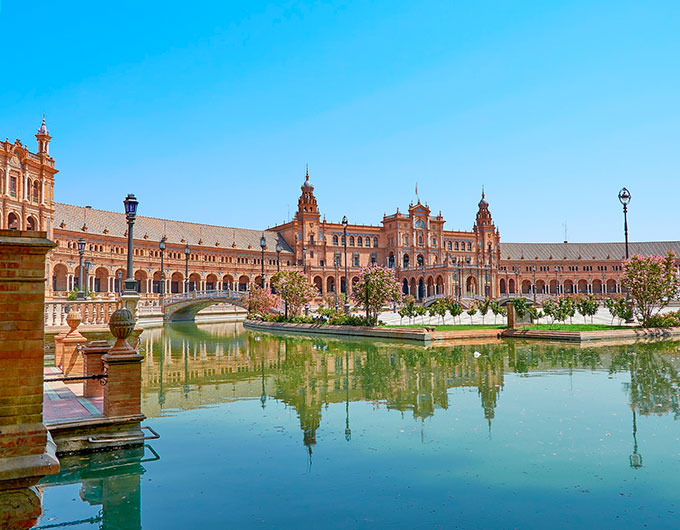 The Plaza de España is a spectacle of light and majesty. Framed in the Maria Luisa Park, this plaza was designed by the great Seville architect Anibal Gonzalez as an emblematic space for the 1929 Ibero-American Expo. The result was a plaza-palace unique in the world.

Museums, itineraries and sightseeing tours are available at the following websites: